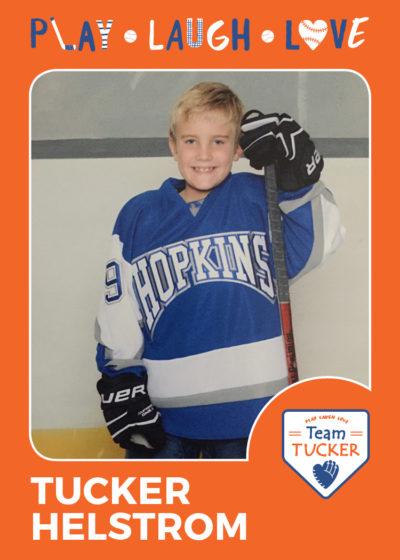 Tucker Helstrom resides in the hearts of everyone who knew him. Although only being with us for 9 ½ years, Tucker left a lasting and inspiring impression on all who were fortunate enough to spend time with him. Tucker had a loving heart perfectly combined with humor that left people laughing and feeling admired by him. Tucker found the good in everyone and inspired everyone to do the same. He accomplished this by making people laugh, inviting them to play and sharing his love of friendship, sports, family, and life. Tucker’s gregarious personality, beautiful blue eyes and warm smile touched the hearts of all who met him, and even those who just read about him or heard his story.

Orange was Tucker’s favorite color since he was 18 months old. He wore orange clothes daily, slept in a bedroom painted orange, and filled his orange backpack with orange school supplies. His only non-orange clothes were his Wild sweats/jerseys and Twins t-shirts. Tucker’s loved ones are always reminded of his love when they see an orange sunset or wear an orange shirt.

Tucker may have died on July 2, 2016, but his love and laughter will always live on in all of us who knew him; and with the Team Tucker Association, his inspiration to play will reach children forever.

"Mom, one good thing came from cancer," Tucker said as he lay in his hospital bed with his mom, Dana.  It was night and the lights were off, but Tucker's face was visible because of the machines pumping chemo and medicines into him had red lights flashing and sounds beeping, always.
"What's that, honey?" Dana replied.
"I got to meet my sports hero." Tucker said with a huge smile across his beautiful, bald head.
That happened on December 16, 2015. It turned out to be a fateful encounter not just for Tucker, but also for Jason Zucker, because soon, Jason would love Tucker just as much as Tucker loved him.
Watch these videos to learn the heartwarming story of Tucker and Jason's friendship. A friendship that didn't end when Jason flew to be with Tucker as he was dying, nor did it end when Jason flew back to attend Tucker's celebration of life in early July 2016.  Tucker will forever be one of Jason's heroes, and Jason will forever be Tucker's and Dana's hero. 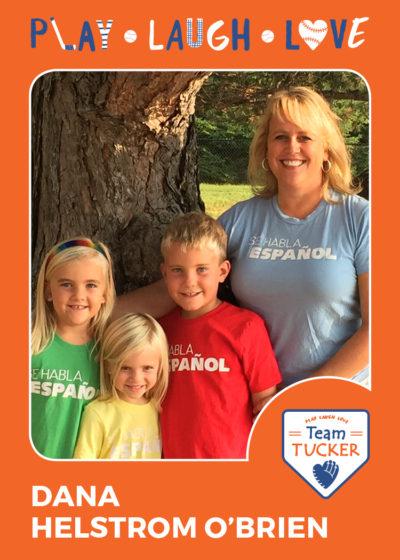 Dana Anderson-Helstrom: Dana is honored to be Tucker’s mother. He not only was the perfect son for her, but also a perfect big brother to Kayci and Siera. Dana loved Tucker’s loving heart with a perfect blend of sarcasm and joking. Like hundreds of others, Dana was amazed by Tucker’s strength and ability to continue to play, laugh, and love others as he battled osteosarcoma (bone cancer) which took his right leg. Tucker drew strength from his mother during his eight-month fight to live, and now Dana draws strength from her son as she strives to live a healthy, productive life without her son. Creating this non-profit is how she will stay strong. Honoring her son will enable Dana to be a great mother for his sisters, to contribute to his community, and to paint the sky orange so that everyone can remember Tucker and how he Played, Laughed and Loved.

Dave Almquist is a territory manager for Olympus Surgical Technologies.  He lives in Hopkins with his wife, Katie, and children Dalton and Vivian where he coaches youth hockey and Little League baseball. Dave is a co-coordinator of Team Tucker’s Hockey Explosion.

Jamie Groth works at Northport Elementary School in the Robbinsdale School District as an instructional support specialist.  She lives in Champlin with her husband, Aaron, and children Mackenzie and Cameron.  The family is very involved with the Courage Kenny Rehabilitation Institute through which Mackenzie excels at basketball and other sports.  Jamie is the co-coordinator of Tucker’s Sandlot in Robbinsdale.

Kimberly Henke also works at Northport Elementary School as an instructional support specialist while looking for a principal position.  She lives in Hinckley with her boyfriend, Tony, and is an original member of the Team Tucker Advisory board, starting in January, 2017.  Kim is the other co-coordinator of Tucker’s Sandlot in Robbinsdale.

Maria Mansour works for MPCI Underwriting as a supervisor.  She lives in Hopkins raising her children Amir and Jasmine.  Maria is involved with event planning for Team Tucker.

Maureen Manley is a senior client coordinator at General Mills.  She lives in Minnetonka and is busy supporting her nephews’ hockey careers.  Maureen is the Team Tucker Wear store coordinator.

Betsey Palmgren is the office manager and lead planner for Jenna Culley Events.  She lives in Hopkins with her husband, Sean, and their sons Jax and Hank, who are active in Hopkins youth hockey and baseball.  Betsey supports the Team Tucker All Star Party.

Laura Smith has worked in publishing and design industries and is now raising her children, Alice and Everett, together with her husband, Dustin, in Golden Valley.  Alice is Tucker’s classmate so Laura has known him since kindergarten.  Laura is the newsletter editor and coordinator for signage for all Team Tucker events.

Keri Strusz is a fourth grade teacher in Hopkins Public Schools and is also a Hopkins resident.  She first got involved with Team Tucker at a Sandlot event.  Keri is a member of the communications team, focusing on social media.

Betsy Vilett is a media center specialist who lives in Hopkins with her husband, Chris, and children, Annie and Charlie.  Charlie was on Tucker’s baseball and hockey teams all three years, with Chris as their coach.  Together with Greyson, these boys were the Three Musketeers.  Betsy is involved with communications and website management for Team Tucker.

Karen Wall is an engineering technician.  She lives in Minnetonka with her husband, Andrew, and kids Nolan and Leah.  Nolan and Tucker played on the same Hopkins All-Star Teams and became fast friends.  Nolan was also one of the first kids to organize a Tucker's Teammates fundraising event.  Karen is our Raspberry Parade coordinator and she supports other events.

Mark Anderson is a loan officer at Wells Fargo and an entrepreneur. Mark is Tucker’s uncle and lives in Mendota Heights with his wife, Jenny, and two of Tucker’s older cousins, Hailey and Henry.

Ryan Anderson is a partner in the family law firm Lubov Anderson & Associates. Ryan is also Tucker’s uncle, living in Minneapolis with his wife, Katie, and two of Tucker’s little cousins, Olive and Frankie.

Jake Barber works in his family company. He lives in downtown Hopkins with his wife, Alissa, and their three children: Jackson, Jayden and Summer. Tucker was Jayden’s best friend and often at the Barber home.

Amy Edwards is a project manager for Jambalaya Group, a franchise consultancy of Ameriprise Financial. She also started and runs a franchise business with her husband, Steve. Amy lives in Maple Grove with her husband and two sons, Tim and Eli. Amy has been a friend of Dana and her family since they attended the College of St. Benedict together.

Bob Hatlestad is a sales professional at Google. He lives in Hopkins with his wife, Betsy, and sons Lincoln and Greyson. Bob was Tucker's baseball coach all three years of his Hopkins Area Little League career. Greyson was Tucker's hockey and baseball buddy and together with Charlie, they were an inseparable trio.

Jim Hatlestad lives in Edina and is a financial representative with Northwestern Mutual along with Tucker’s grandpa, Dan. He was a fan of Tucker’s baseball abilities and performances.

Joni Voigt is a finance consultant at Salo. Together with her husband, Al, and daughters Taylor and Cassidy, she lives in St. Louis Park where she is on the youth hockey board and coaches for Hopkins Park Girls Hockey. Joni was Kayci's first coach after Tucker died and bolstered Kayci's drive to continue playing despite the loss of her favorite teammate.