Tucker's VIPs is Team Tucker's main program.  We help kids who are battling life-threatening diseases by finding ways to bring Play, Laughter, and Love into their lives. We believe that these kids need opportunities to escape their painful and scary realities in order to keep up strength for their battles. We can help by:

Please fill out the VIP Request Form if you know of a child we may be able to help.  Or you can donate now to help us help more VIPs. Some of our recent VIPs and family who are playing, laughing, and feeling the love of family and friends thanks to our generous donors. 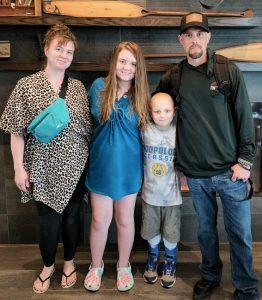 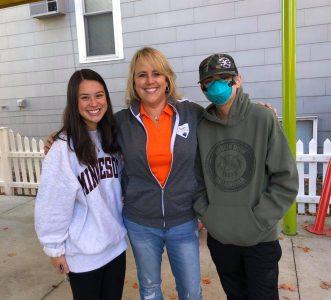 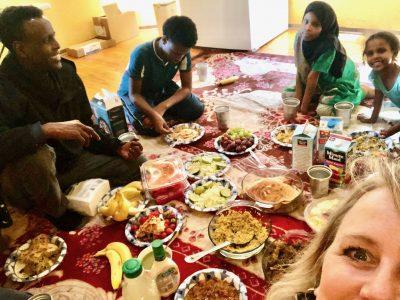 Dana was invited to a celebration dinner at VIP Sulayman's home 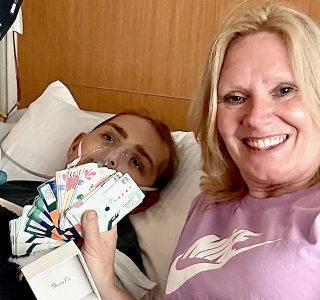 VIP Ryan was able to give his mom some special birthday gifts, thanks to our donors 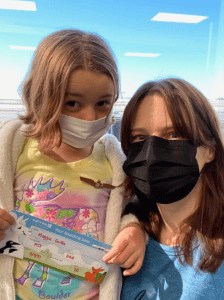 Sophie's sister and mom visited her in Colorado. 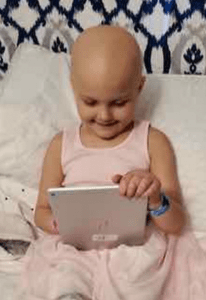 Lennox connects with family with iPad given to her by Team Tucker. 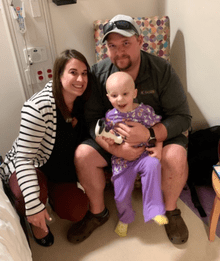 VIP Lucas's family appreciated that extended family could travel to be by their side. 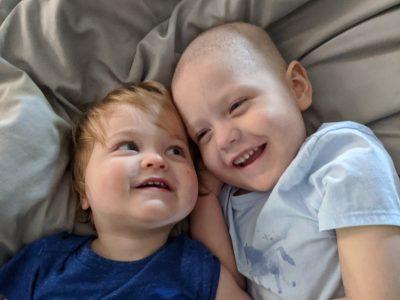 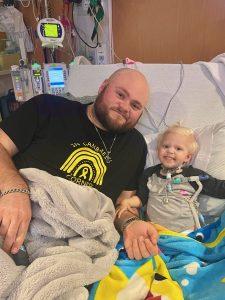 VIP Cambree loved time with her dad every weekend he could travel to see her in the hospital. In Bismarck, ND, on February 7th, Brady and Abigail learned their little girl was struggling to breathe, not because of a respiratory virus like they had been told for weeks, but because their 2 year-old daughter had a tumor the size of four baseballs taking over her chest cavity. It was crushing Cambree’s lungs and had forced her heart and other organs below her belly button. She was immediately flown to Fargo, then to Children’s Hospital in Minneapolis, with medical teams saving her life twice.

Intense chemo treatments began with mom and dad at her hospital bedside. After eight weeks, however, Brady’s leave was over and he had to return to work in Bismarck. He was in tears at the thought of leaving his baby girl while she was fighting for her life.  That’s when Team Tucker got the call. After learning that Team Tucker would fly him back for the next four weekends, Brady was again in tears, but these were happy tears. Thanks to our donors, he would only have to be away from Cambree for 120 hours and then be back by her side to take care of her and support his amazing wife. In June, it was time for Cambree to undergo a groundbreaking and lengthy surgery to remove the remaining tumor, now down to the size of “just” one baseball. Brady and Abigail were consumed with anxiety about this first-of-its kind surgery and wanted support. Our donors helped again by covering the cost of the hotel for Cambree’s grandparents and little brother to stay in Minneapolis for the week. Team Tucker was able to bring the family together when Cambree needed it most. She was in surgery all day, with her chest cracked open as the surgeons performed the next miracle: They got the cancer out, ALL of it!

On Cambree’s 138th day in the hospital, Brady flew into Minneapolis one last time. This time it was a one-way ticket because Brady finally was able to bring his girls home! Cambree needs thirteen more rounds of chemotherapy, but she can do that in Bismarck, surrounded by the two most important things: family and love.

Thank you to all of the generous donors who make the VIP Program possible, and a tremendous thank you to Brady and Abigail for sharing the story of their amazing daughter, Cambree. "The most important things are family and love. Team Tucker honors both. I can’t thank you enough." - Brady, May 2022 Logan, catching trout for their dinner at Running Aces in Columbus, MN. The family enjoyed a real VIP experience thanks to the very generous ​package that Running Aces provided!

From Logan's Mom, Rochelle: We are from Kyle, South Dakota, which is located on the Pine Ridge Indian Reservation. I heard of Team Tucker by visiting the hospital library and I read the information packet. Logan was admitted to Masonic Children’s Hospital on May 17, 2019 and discharged to the Ronald McDonald house on May 22, 2019. He was officially discharged [and able to return home] July 17, 2019. We were at the Ronald McDonald house for almost 3 months. The visit from our family allowed Logan to reconnect with his dad who has been out of the home for 2 years. I think this visit was the beginning of his healing process emotionally. The best part of the visit was being engaged in all the activities with our family. It was great to see Logan smile. To work with Team Tucker’s VIP program was the absolute best experience. They were all caring and compassionate towards us and really cared about Logan and his interests in sports and being with family. This was a memorable experience for all of us as a family. We would have never had this opportunity to be with our family without the help and support of Team Tucker. Team tucker really cares of about children and their families. Thank you Team Tucker for all that you do.

Logan loves sports. During the summer of 2019, when he was 16 years old, Logan spent over three months at Masonic Children's Hospital and the Ronald McDonald House while receiving a kidney transplant and follow up care. Logan had his mom, Rochelle, by his side, but they both missed their family and friends from back home in southwestern South Dakota. Fortunately, Team Tucker was able to provide them with a visit in late June from several family members.

Thank you to the businesses who partnered with us to make this visit possible for Logan's family!